As we mentioned in part #2 of our UX design blog series, customers are struggling to match applications to the speed of their business demands and the...

As we mentioned in part #2 of our UX design blog series, customers are struggling to match applications to the speed of their business demands and the biggest challenge is not getting stuck on day-to-day needs. Akeneo is built on listening to customer input and feedback to accelerate product innovation.

Now it’s time to implement our customer feedback into real product changes and solutions that will bring value based on our key themes. Our product innovation must: <<< New product grid featuring the vertical and collapsible side bar >>>

To inspire new ideas, we conduct innovation games between product owners, developer squads, and UX designers to identify problems and develop solutions. The innovation games are a series of brainstorming sessions where teams can bring in their own ideas, choose some from existing feedback, or select from the Idea Manager.

Creating a strong collaborative environment facilitates discussion between all teams so ideas are better integrated to work together, rather than being disparate features.

Our UX designers begin the initial design process by considering the core functionalities of PIM such as the product grid, navigation menus, product selection, family filters, and then ideas develop from there.

Once new features are determined, the UX designer will:

We know some prototypes will fail the test. Our goal is to prove usability, business value and productivity gains. 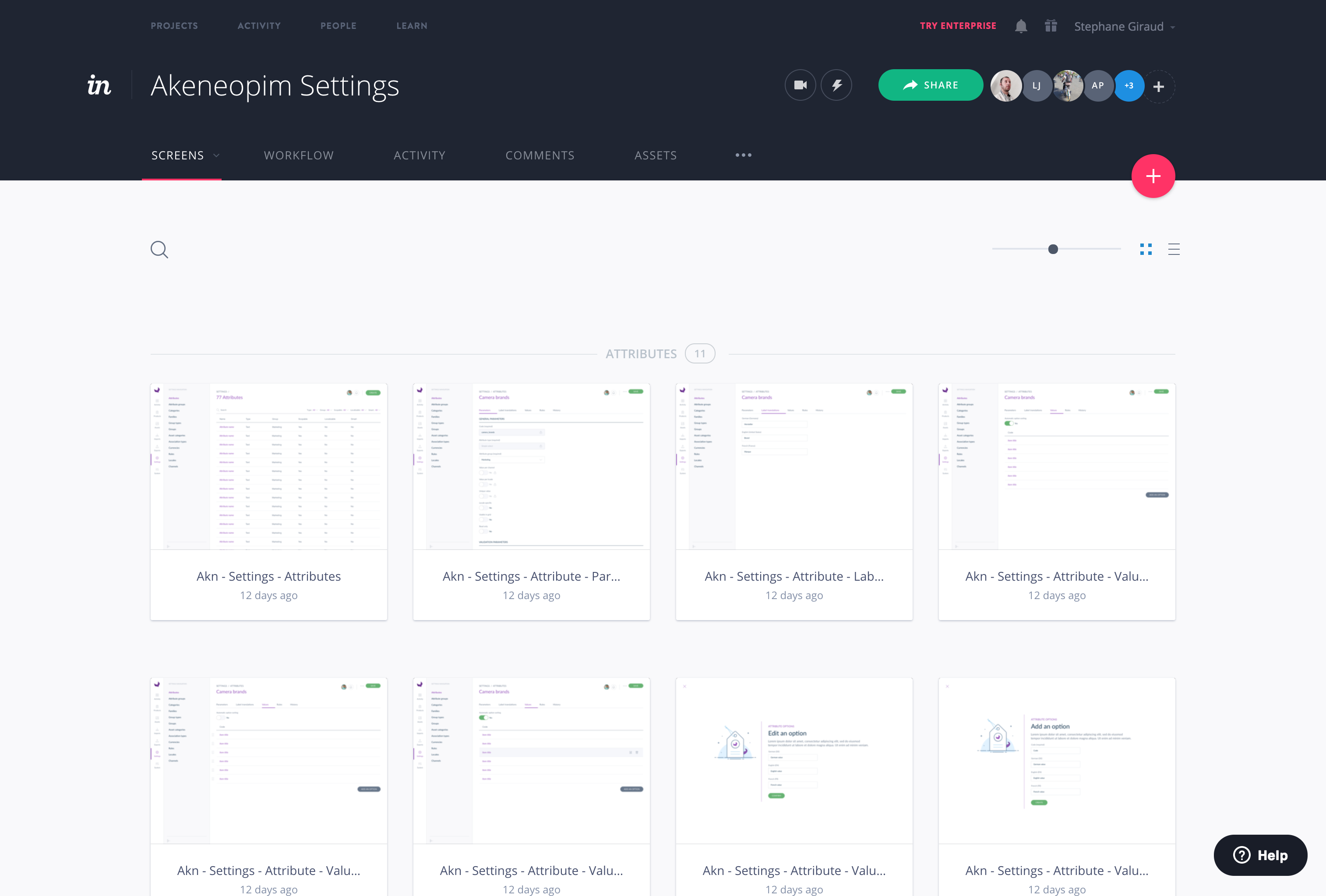 Example of an Invision prototype

Once the initial prototype is created it moves to our internal testing process. We assess the prototype by having our own employees compare the functionality of the new feature with the old. We use the System Usability Scale (SUS) to objectively determine the usability.

Everyone who tests the feature rates it using our standardized form. Then the scores are averaged to determine the score of the new feature, which is then compared to the previous score. Initially, we test using internal employees who can apply a critical eye to new features. Anyone is welcome to test the new feature – except for the product team because they know all the insider tricks.

Based on internal testing results, the product team will iterate multiple designs until they create something that can be presented to end users. Product owners and UX designers collect feedback and then reject or approve the new design.

For example, Martine a project manager at a famous retailer, notified us, that it might be less risky to move the final confirm button in another area than the other buttons involved in the mass edit step by step workflow, and we did it. It’s a very simple improvement but all that improvements put all together make our UX better.

By the twist of fate, the same client can sometimes reject a feature he demanded by giving a lower score than the current feature or at the opposite give us very interesting tips.

So how did our UX design process impact Akeneo PIM 2.0?

Designers often feel tied to global logic and stuck in the UX stack that previous versions included, even if there is a way to do it better. They don’t want to freak out their users with a completely new design that makes them feel like all their previous experience using the product is obsolete. But at some point, that legacy UX becomes a prison.

So In Akeneo PIM 2.0 we have broken out of the constraints of our previous UX stack and completely refreshed the design and global logic behind the interface. The inception of this new UX began a year ago in September 2016. This revamping project was a huge undertaking that took six months of prep utilizing a full-time squad of developers and all product owners.

Of course, we remain focused on our main goal: creating an intuitive PIM solution that facilitates your daily tasks while increasing productivity. We hope you’ll find that Akeneo PIM 2.0 does just that.

Ready to give it a try?

Download the Akeneo Community Edition or if you want a more customized test experience, feel free to contact us for a consultation.

Interested in learning more about UX Design? Read the second portion of this blog series:

This site is registered on wpml.org as a development site.